From Kilimanjaro to Lake Tanganyika

17 days Fixed Departure Safari from North to South and further on to West Tanzania. HighlightsItinerary
;

This adventurous safari takes you to remote wildlife areas with an impressive variety of flora and fauna as well as scenic landscapes. Whether you are travelling with motor boat to Gombe Stream NP for chimpanzee tracking, game viewing in the untouched wild of Katavi NP, hanging out on the shores of Lake Tanganyika or, just hiking in the cooler, fertile Southern Highlands and enjoying a freshly brewed cup of tea straight from one of its’ tea plantations – this safari will keep you on your toes. It’s not for the faint hearted but for those who wish to experience a real safari.

Arrival and transfer from Kilimanjaro International Airport to your lodge.

After breakfast, transfer to Tarangire National Park for a game drive. This park which is famous for its gigantic baobab trees and large herds of elephant (some of which have the longest tusks in Tanzania!) is home to many different mammals and birds. The Tarangire River which flows through the park draws the animals to it’s banks especially during the dry season and it’s swamps in the south also provide water and food when times get tough.

Today is a long day although the route takes you through picturesque hilly landscape to Dodoma, Tanzania’s capital. Along the way, you will stop to visit the Kondoa rock art sites (since 1981 a UNESCO World Heritage Centre).

The Kondoa Rock Art Sites include over 150 natural caves or shelters that have been used for rock paintings over at least two millennia. The paintings have high artistic quality and were made with a brush-like instrument. They depict elongated people, animals, and hunting scenes. The rock art of Kondoa belongs to the distinct rock art traditions of central and southern Africa.

Another longish driving day as you proceed on towards Ruaha National Park. Along the way you will pass through the lively city of Iringa. The name is derived from the Hehe word lilinga, meaning fort. The city itself has approx. 120,000 inhabitants and is the gateway to southern Tanzania. If all goes well, you might arrive in time to enjoy a sundowner from the lodge terrace.

Full day game drive in Ruaha NP. This park, which hosts a unique variety of species, is the largest national park in Tanzania. The name of the park is derived from the Great Ruaha River, which flows along its southeastern margin and is the focus for game-viewing. The park is noted for its large elephant population, with about 10,000 roaming here. More than 571 species of birds have been identified in the park. Among the resident species are hornbills, kingfishers and sunbirds. Many migratory birds visit the park like the white stork.

Other noted animals found in this park are cheetah, leopard, lion, African wild dog, giraffe, hippopotamus, buffalo and sable antelope. The rhinoceros population was last sighted in 1982 and are most likely extinct in the park due to poaching.

After breakfast you will partake in a morning game drive in Ruaha NP before proceeding on to the Southern Highlands.

Today you will drive to the Southern Highlands where tea is grown. The highlands comprise a range of volcanic mountains, partly covered in forest and grassland. This region is Tanzania’s main bread basket and also experiences the coldest weather in the country, especially in the months of July.

It also experiences the highest rainfall in Tanzania for part of the year. Dotted with waterfalls and craters, the Southern Highlands is a ramblers paradise. Today you can enjoy a short walk to the fascinating Kaporogwe Waterfall.

In the morning you will visit a tea plantation where you will learn everything there is to know about tea farming, harvesting and drying. Afterwards, it’s time to stretch the legs and take part on a nature walk to the “enchanted” Ngozi crater lake. Lake Ngozi is the second largest crater lake in Africa.

After breakfast, drive to Kipili. Lake Tanganyika is an African Great Lake. It is estimated to be the second largest freshwater lake in the world by volume, and the second deepest, in both cases, after only Lake Baikal in Siberia; it is also the world’s longest freshwater lake. The lake is divided among four countries – Tanzania, Democratic Republic of the Congo (DRC), Burundi, and Zambia, with Tanzania (46%) and DRC (40%) possessing the majority of the lake. The water flows into the Congo River system and ultimately into the Atlantic Ocean.

The name apparently refers to “Tanganika”, ‘the great lake spreading out like a plain’, or ‘plain-like lake’.

Lake Tanganyika is home to many different and often, endemic fish species (at least 250 species of cichlid fish and 75 species of non-cichlid fish). Day 10: Simply spend the day relaxing on the beach or choose from a variety of optional activities eg. snorkelling, diving, sailing.

Full day game drive in Katavi NP that encompasses the Katuma River and the seasonal Lake Katavi and Lake Chada floodplains. Remote Katavi NP is an absolute highlight and home to a huge variety of animals. Wildlife features include large animal herds, particularly of buffaloes, zebras, wildebeest, giraffes and elephants, plus along the Katuma river, crocodiles and hippopotami which upon annual dry seasons results in mud holes that can be packed with hundreds of hippos.

Today is another driving day. Your route takes you through picturesque landscape to Kigoma. Kigoma is a town and lake port in western Tanzania, on the eastern shore of Lake Tanganyika and close to the border with Burundi and the Democratic Republic of the Congo.

It serves as the capital for the surrounding Kigoma Region and has a population of approx. 140,000 inhabitants and an elevation of 775 m. It is one of the busiest ports on Lake Tanganyika, since historically it was the only one that had a functioning railway connection (the one at Kalemie in DR Congo is not operational), a direct link to the seaport at Dar-es-Salaam. On arrival at the hotel, check in and enjoy an ice cold sundowner or a dip in the pool with stunning views overlooking the lake.

After breakfast, you will travel via motorboat to Gombe Stream NP. Established in 1968, Gombe Stream is the smallest national park in Tanzania, with only 52 km² of forest running along the hills of the eastern shore of Lake Tanganyika. The terrain is distinguished by steep valleys, and the forest vegetation ranges from grassland to alpine bamboo to tropical rainforest. Accessible only by boat, the park is most famous as the location where Jane Goodall pioneered her behavioral research conducted on the chimpanzee populations. The Kasakela chimpanzee community, featured in several books and documentaries, lives in Gombe Stream National Park.

Red-tailed monkeys and blue monkeys have also been known to hybridize in the area. The park is also home to over 200 bird species and bushpigs. There are also 11 species of snakes, and occasional hippopotami and leopards. Visitors to the park can trek into the forest to view the chimpanzees, as well as swim and snorkel in Lake Tanganyika with almost 100 kinds of colorful cichlid fish.

You will take part in a chimpanzee tracking tour, guided by a ranger in the company of a tracker. It is an exhilarating experience to spend time observing the chimpanzees in their natural habitat and you will be amazed to discover how active and loud they can be! After spending an hour (allocated time allowance) with the chimps, your ranger and tracker will bring you back to headquarters where you will board your motor boat for your return trip to Kigoma.

After an early breakfast, depart for the long drive through Tanzania’s “Wild West” to Mwanza at Lake Victoria or, optional flight from Kigoma to Mwanza or Arusha. Mwanza is a mid-sized port city on the southern shores of Lake Victoria in northwestern Tanzania. With a population of over 700,000, it is Tanzania’s second largest city, following Dar es Salaam.

Transfer to Mwanza airport. Departure or extension. (B/-/-)

The next two days will be spent exploring this park on game drives. The wide open grassy savannah plains of the Serengeti, interspersed with scattered “kopjes” (granite boulders which have been ‘peeled’ smooth by the constant dramatic changes in temperature) is a paradise for grazers. During their annual migration, thousands of wildebeest, zebras and antelope move continuously through this worldwide unique ecosystem on the search for fresh grazing areas. Lions and hyenas follow the herds in the hope of an tasty meal.

During the game drives in the park you are most likely to see elephants, buffaloes, giraffes, ostriches and many other species and, with a little luck, cheetahs hunting or even a dozing leopard lying in the fork of a tree. Along the sand banks of the rivers, crocodiles can be seen sunning themselves whilst the depths of the waters are closely guarded by pods of tightly-packed hippos.

After breakfast, you will embark on a game drive en route to Ngorongoro Crater where you will spend up to five hours doing a game drive in the crater. In this “Garden of Eden” (a UNESCO World Heritage Site since 1978), it is possible with a little luck to see all of the “Big 5”. Apart from elephants, buffalo, leopards and many lions, there are also more than twenty black rhino living in the crater.

These animals all share an area of only 260 km² with numerous wildebeest, various antelopes, zebras and many other East African mammals.

This morning you will partake in a guided walk to the nearby Elephant Caves, deep in the Ngorongoro montane forest. Elephants, buffaloes and other wildlife frequently visit this place to dig up mineral rich soil. The trail is lined with fascinating flora, some endemic to the thick montane forest bordering the south-eastern slopes of the Ngorongoro Crater Highlands.

Team spirit and willingness to forgo comfort during long drives in non-acclimatized safari cars on badly-maintained roads and tracks is necessary. Sure-footedness, a good fitness level, and the ability to cope with different climates especially for the chimpanzee tracking and the walking trips are a plus. It is not absolutely necessary to participate in the individual walks as they are day trips or short walks. Certain types of accommodation are of a very basic standard and only offer shared toilets/showers.

We recommend a few relaxing days after your safari on the beaches of the Indian Ocean, for instance at Bahari View Lodge on the lovely, south-east coast of Zanzibar Island. 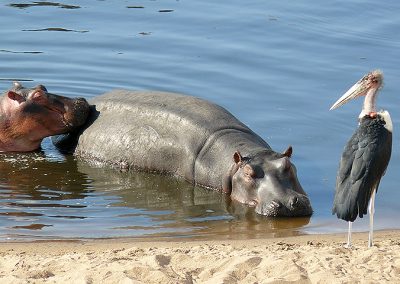 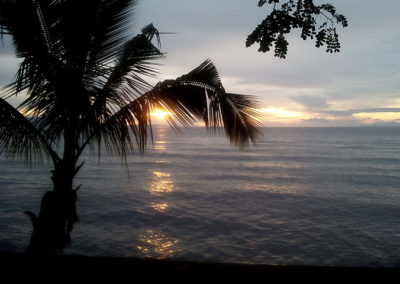 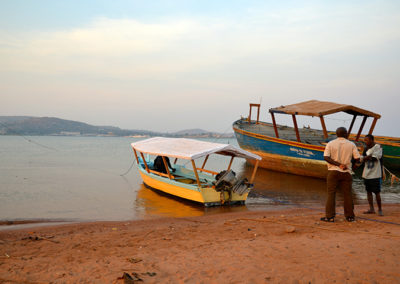 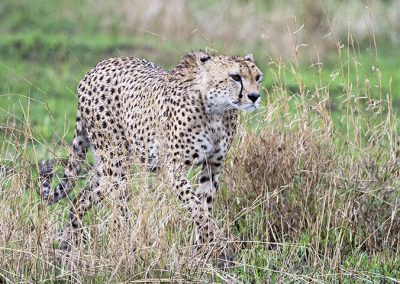 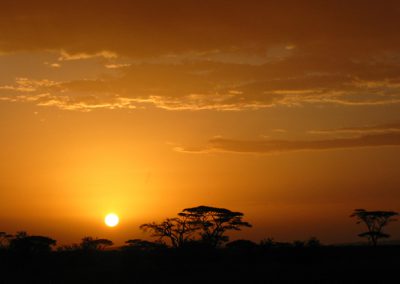 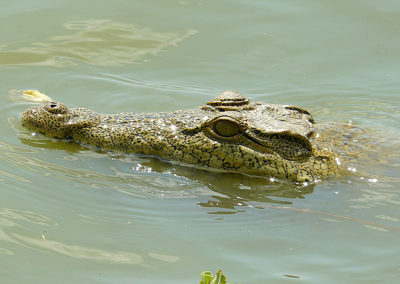 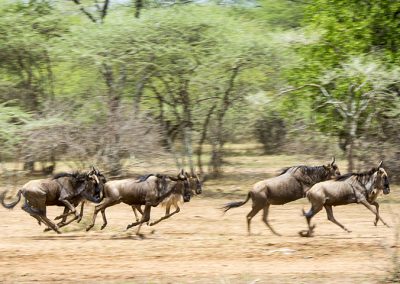 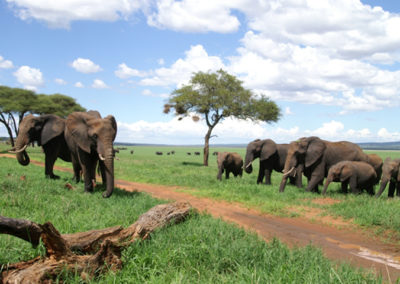 Simply leave your contact details and requested departure date below, and we will be in touch shortly!